Detention basins that have received the most publicity in the Toowoomba Regional Council (TRC) area are the relatively new basins constructed in Garnet-Lehmann and Ballin Drive Parks. There are however, a number of other smaller basins that were constructed some time ago along creeks in the Toowoomba town area. One of these is a small basin adjacent to Ethan Street in the upper reaches of East Creek. As an engineering feat, the basin certainly achieved its purpose, but from an environmental and amenity perspective, let’s just say that it was - a little deficient. 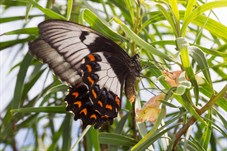 With funds donated by the CBD business community, the Council set about a facelift for the basin, trucking in top soil and mulch in preparation for the planting native species in selected areas where their future growth could not threaten the structural integrity of the basin. Redleaf Environmental was asked to provide environmental advice for the project, developing a theme for the area and suggesting a plant list. We also helped to run a community consultation workshop to present our ideas and gather feedback from local residents. 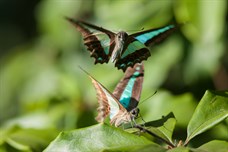 After some thought, we decided that a “butterfly park” might be an interesting focus for the selection of plantings. We looked primarily for plants that would be useful as food plants for larvae, rather than flowering plants for adult insects. Our selection also had to consider availability, and so we based our final selections on plants available from the TRC nurseries. We also recommended some ‘natural’ features, such as logs to sit on and also the removal of woody weeds from an existing line of trees that separated the basin area from a playground.

The day for planting involved local residents and plants were duly located and dug in, followed by a Bar-be-que.

We now have to wait and see what the area will look like, once the plants start to grow!  But even now, it looks a great deal better than it did previously. Will it attract butterflies? Again, time will tell. Not all of the plants are exclusively for the butterflies, and many will have flowers and nectar for birds. In time, the park will become part of the East Creek urban wildlife corridor, connecting with Ballin Drive, the waterbird habitat and Garnet-Lehmann. 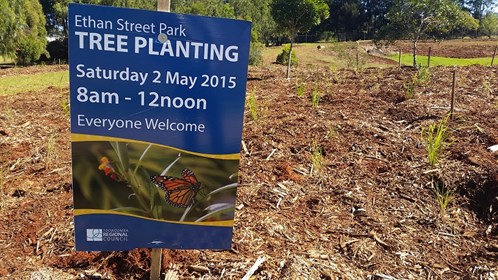