A range of fish habitat enhancements to Oakey and Myall Creeks on the Darling Downs has been installed by the Condamine Alliance as part of its Dewfish Demonstration Reach. Redleaf Environmental and the Condamine Alliance recently organised a field day for Council staff from Toowoomba to witness first hand how fish hotels, large snags and other riparian restoration efforts can bring back the native fish.

Condamine Alliance river specialist Kevin Graham stated, "We have been working with a number of organisations and landholders on the Darling Downs for some years now and have made huge in-roads to river restoration and recovery of our iconic native fish."

"Some species of fish have increased in abundance ten times over which is an amazing statistic given the declining populations of Murray cod, eeltailed catfish and golden perch in other parts of the Murray-Darling Basin." Mr Graham said.

Toowoomba Regional Council project management staff were impressed with the degree of habitat restoration that has happened at Oakey Creek.

"We were able to stand on top of fish hotels buried into the creek banks, and observe large woody debris instream and rehabilitated areas of the riparian zone. Even though the site is heavily engineered, it doesn't appear so because of the seamless interaction between the environment and the ecological design of the enhancements." said Darren Fielder, aquatic scientist, Redleaf Environmental.

Redleaf was keen to show Toowoomba Regional Council officers the benefits to the native fish populations and also to the natural amenity of this popular camping and fishing spot. The Redleaf team of aquatic and terrestrial scientists have been working with the Toowoomba Regional Council to restore East Creek which is a small urban stream that runs through Toowoomba. This has included the installation of snags, fish hotels or fish lunkers, and riparian zone plantings. 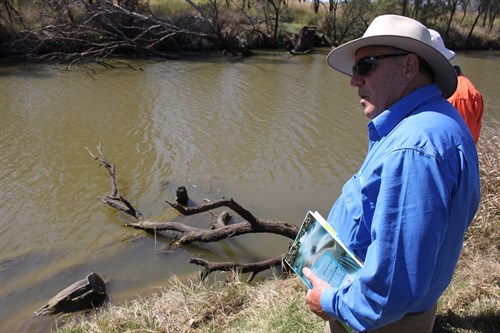 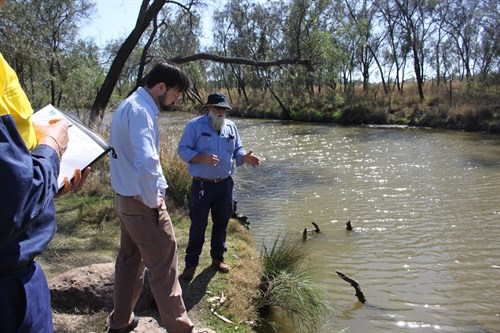 Sizing up the fish (fish measurement is between the eyes)