The recently constructed Grigor Bridge on the Mary River at Conondale in South East Queensland was nominated for the Cement Concrete and Aggregates Australia environmental award. As part of the project team from the Department of Transport and Main Roads, Redleaf Environmental scientists were nominated for the environmental award for their expertise in fauna management during its construction. The new Grigor Bridge was officially opened in March this year.

Fauna scientists Dr Darren Fielder and Dr Bruce Thomson developed a Species Management Program (SMP) for the duration of the bridge works to protect microbats, platypus and freshwater turtles and their breeding places during the project.

The plan was developed and implemented in accordance with environmental legislation, and included highly successful fauna mitigation strategies, which have since been recognised by the peak national body Cement Concrete and Aggregates Australia. 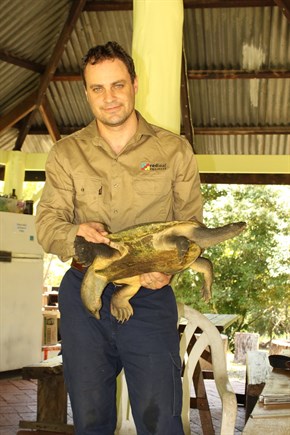 As part of the SMP, Redleaf Environmental and its team of scientists were engaged to conduct a series of site visits and fauna clearances. Six fauna clearances were performed after the project commenced in early 2013, clearly demonstrating an abundance of wildlife in the area.

The Mary River is home to a number of endangered and protected wildlife species and covers approximately 9,500 km2. Some of the animals that call the Mary River catchment home include the endangered Mary River turtle, white-throated snapping turtle, Krefft’s turtle, common sawshelled turtle, eastern long-necked turtle, the broadshelled turtle, platypus and the large-footed Myotis bat.

Fauna clearances were performed by Redleaf fauna specialists, with expertise in the correct capture and handling of animals for monitoring and protection. The latest fauna clearance, carried out in early March, was to clear the work area of turtles, platypus and fish for the demolition of the old timber bridge.

Dr Darren Fielder explained that during the last clearance, an iconic and endangered Mary River turtle (Elusor macrurus) was captured at the bridge site. This was the first Mary River turtle to be found this far upstream on the river which was previously only caught below Kenilworth in the main stream.

“The discovery of the endangered Mary River turtle and also the threatened southern white-throated snapping turtle in this section of the river demonstrated the necessity for precautionary principles during the construction and demolition of the new and old Grigor Bridges,” Dr Fielder said. 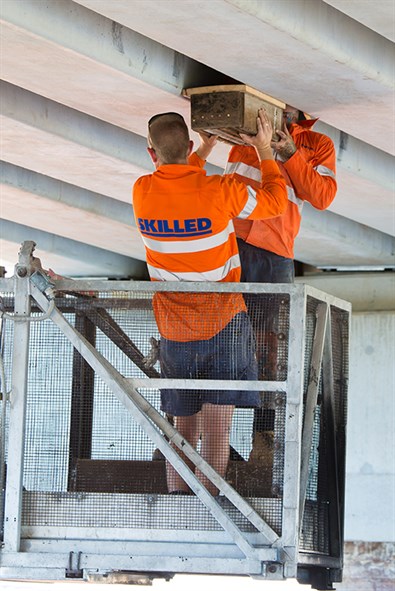 Dr Bruce Thomson, a national microbat expert, said another of the significant outcomes of the program included the fastest relocation of large-footed Myotis bats into custom built roosts under a bridge ever to have taken place.

“This is the first successful attempt to attach custom-designed and built roosts to a concrete bridge structure that we are aware of,” Dr Thomson said. “The uptake of the five new bat roosts within days of them being installed was much faster than anticipated and we have no similar records of roost colonisation occurring so quickly in any other site involving this bat species.”

The new roosts were installed on the new bridge to re-house the bats from the old structure. Through dusk observations during March, more than 30 bats had taken up occupancy in two of the five bat roosts.

As part of the program, searches for platypus were conducted along the rivers banks throughout the day and at dawn and dusk. Several individuals were observed in the Mary River at Conondale.

With the help of Redleaf, the Department of Transport and Main Roads was able to demonstrate its duty of care to threatened species over the course of the entire 12 month construction of the new bridge and demolition of the old structure.

The project team and scientists have been commended for their commitment to preserving the Mary River’s precious ecosystem, whilst delivering vital infrastructure for the region. 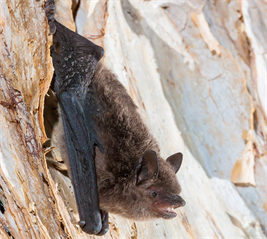 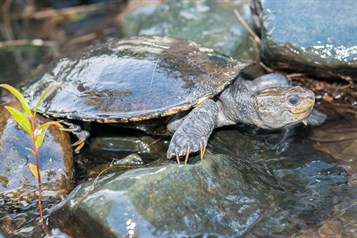 Eligible reconstruction works on this project will be funded under the Natural Disaster Relief and Recovery Arrangements. Under these arrangements, the Australian Government provides up to 75 per cent of the funding, with 25 per cent from the Queensland Government.

The Queensland Government has provided additional complementary funding to improve the bridge to better meet the community’s long-term requirements.