The realignment and upgrading of Middle Road near Crows Nest, north of Toowoomba by FKG Group necessitated the clearing of several large hollow bearing trees. 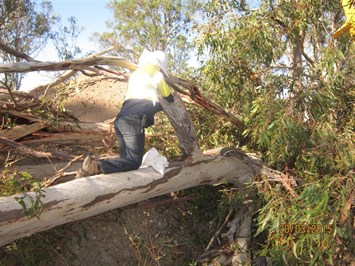 FKG and National Vegetation Management (NVM) worked with Redleaf to ensure native wildlife was kept out of harm’s way.

"Most hollows on large trees were located very high up and therefore inaccessible to check whether an animal was occupying it or not," Dr Martinez said.

"Catching and relocating possums can be challenging as they have very sharp claws and teeth and can cause a great deal of damage if not properly handled. Also, being nocturnal we can’t just release them anywhere and hope for the best". 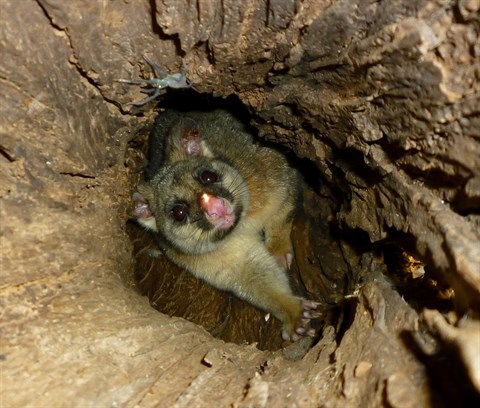 Brushtail possum relocated along with his hollow

Redleaf fauna spotter catchers are trained in animal handling practices, including venomous snakes, and every effort was made to minimise stress to the animals during the clearing of the vegetation.

For instance, with the help of FKG and NVM staff, a hollow branch containing a Brush-tailed possum was carefully cut out and relocated away from the work site and within an area containing suitable hollow trees. The branch was positioned at the base of a large tree and the entrance of the hollow hidden from direct sunlight. 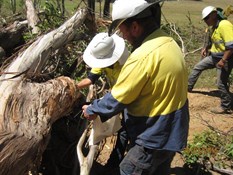 Another possum had to be manually removed from its hollow, put into a calico bag and relocated in a suitable large hollow branch.

These logs were monitored over the period of a day to ensure that the possums remained sheltered and safe. Further inspection the following day revealed that the two possums had vacated the logs over night.

Because of concern for wildlife, changes were made to the road design by FKG to spare a large eucalypt located on the edge of the clearing zone.

The road works were funded by the Toowoomba Regional Council.