Rosellas, cockatoos, king parrots, lorikeets and other wildlife are set to benefit from the installation of more than 40 nest boxes in Garnet Lehmann and Ballin Drive Parks.

As part of ongoing works along East Creek, Toowoomba Regional Council arranged for a variety of nest boxes to be installed to attract native birds and animals to the area. 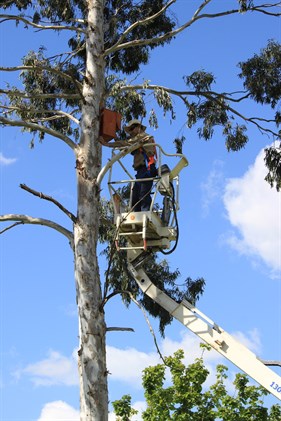 The team from RedLeaf Environmental has installed the boxes to the large gum trees in the two parks. The nest boxes will increase the number of nesting sites across Toowoomba and enhance East Creek as a suburban wildlife corridor.

RedLeaf Principal Scientist Darren Fielder said the boxes were chosen for a range of bird species and micro bats (small forest bats) to use for nesting and roosting in. "These types of initiatives by the Council can only enhance the parkland areas for the benefit of the native animals and also for the enjoyment of the residents who regularly use these parks for recreation," Darren said. "Next time you go for a walk in Garnet Lehmann Park, look up and you will see the boxes attached to the trunks and branches of the trees. "Only a day after installing them, the Red Leaf Projects team saw a number of pale-headed rosellas taking a close look at several nest boxes. "They were seen checking out the new housing with several taking the opportunity to have a tour inside the boxes. It won't be long before they move in permanently!" 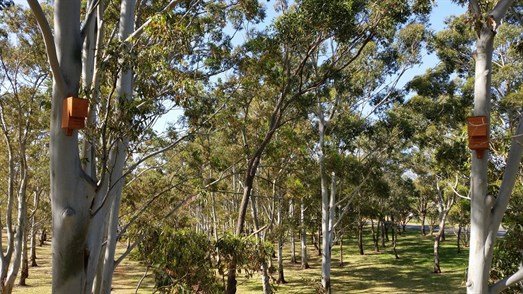