Toowoomba-based environmental scientist from Redleaf Environmental says finding a small population of a threatened grass in the middle of the city was exciting, as is the process of conserving it in another park.

Darren Fielder holds a punnet of the rare hairy joint grass discovered at the Toowoomba waterbird habitat. It is being propagated at the Toowoomba council nursery and is being planted in wetland areas of a newly redeveloped park. "Every species is significant," he said, "whether it's a whale in the ocean or the Wollemi pine down in New South Wales, or a small grass here in Toowoomba."

Darren says there are only 15 known populations of the grass in south-east Queensland and northern New South Wales. "It has broad leaves that clasp around the stem and has little bristles at the back of the leaf, and that's where it gets the name 'hairy joint' grass," he said. 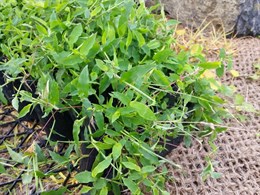 The grass was discovered at the Toowoomba waterbird habitat. "I don't know of too many other situations where we have had a case like this," Darren said. "This is a rare species of plant in an urban creek that has thankfully survived through development over many decades."

The hairy joint grass has been used in the redevelopment of Garnett Lehmann Park, downstream of the waterbird habitat. "We wanted to replant local native species to get the feel of Toowoomba back along our creeks rather than planting exotic street trees," Darren said. "To have the conservation element of the hairy joint grass as part of it was great too."

Darren says his team helped develop the restoration plan for Garnett Lehmann Park after the council built a detention basin in the middle of it for flood mitigation. The project was controversial as more than 100 mature eucalypts were cut down to make way for the basin. "We wanted the redevelopment to have ecological value and thought a threatened plant found in the middle of the city was worth pursuing," Darren said. "From a conservation point of view we need to take care of these things so that future generations have got these plants still part of the ecosystem." 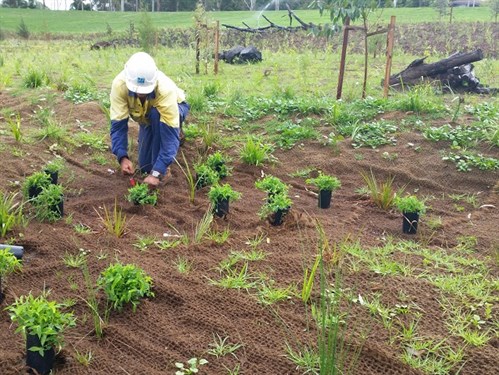