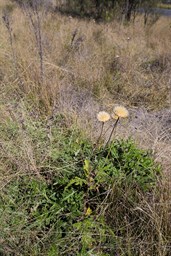 Redleaf Environmental provided ecological services, surveying the proposed disturbance footprint for threatened plant species before construction. A number of threatened plant species are known to occur in the general area, including Austral Cornflower (Rhaponticum australe, photo) and several grasses. They can be hard to detect in the long grass adjacent to existing roadways where they often persist, protected from grazing and weedicides.

In this case, no threatened plant species were found and so specific mitigation strategies were required. The environmental surveys allowed Seymour Whyte to discharge their duty of care in relation to State and Commonwealth listed threatened species (Matters of National and State Environmental Significance, MNES/MSES) for this section of the highway upgrade.

The Warrego Highway is Queensland’s principal east-west route, connecting people and freight from Darling Downs South West Region to Toowoomba. The project, located between Nugent Pinch Road, west of Toowoomba and Leeson Road in Charlton in the Darling Downs, is the first stage of a new $653 million Nation Building program funded by the Federal Government.

Protected Flora Surveys are a requirement under the Queensland Nature Conservation Act 1992 and are discussed in more detail on our website here.